The Man is a set of songs, tunes and short linking readings that lasts about 75 minutes, written by Alan and Paul Murray, with help from Tony Bramley, between 1990 and now.  To download each song, right-click on the link and “save link as”. 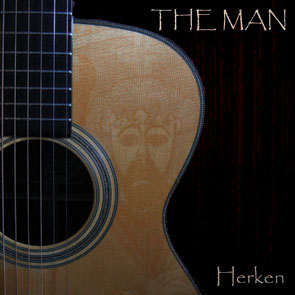 They tell some of the stories of the man called Jesus – but (and it’s a major but) The Man is not aimed just at Christians, so please don’t abandon this website just yet if you’re not a churchy-person! The songs are written in “folk” or “traditional” style and make no specific allusions to belief or religion until the very end, when the man comes out from behind the arras and gets his name. We’re not trying conceal our own beliefs, or pull the wool over your eyes. We simply invite you to hear and to enjoy the music, to add the stories to your own view of Christianity and the man in question and to make your own mind up.  The truth is that we’re a mixed bag of believers, half-believers and questioners ourselves.

For those who are interested in such things, The Man got “started” when Alan wrote a song called The Man on the Shore after reading an old legend about the origin of the marks on the side of the, extremely ugly, fish called the John Dory … in Flora Thompson’s lovely book, Lark Rise to Candleford (we’ll leave you to follow up this riddle yourself!)

The Man was first performed on the Edinburgh Fringe in 1992 and has since grown as new songs have been added. The “show” then included a stunning set of slides compiled and taken by Lainey Adam – then bass player with the Christian rock band Rock the Boat with Alan, Glynis, Tony and Paul. Rock the Boat is now, sadly, no more – the victim of its members’ busy schedules. The Man has, however, grown by a song and tune or two (actually, several!), Lainey has moved on and is too busy designing and making beautiful stained glass to be involved in The Return of The King Man! So – we have since enlisted the help of St. James the Less Young Church to give their visual interpretations of the songs. Typically, they have provided evocative, direct and moving images that go to the heart of the stories in a way that adult artwork often struggles to achieve. The Man in performance is now illustrated stunningly by this visual backdrop, thanks to Microsoft’s Powerpoint! We have also press-ganged (without much difficulty, it has to be said) St. James’s most excellent choir into singing and some chums into reading . Alan has passed on some of the songs that he sang himself in the Fringe show to Alison, Glynis, Paul and Sooz – displaying generosity and more than bit of Nepotism at the same time. Finally, Ros Hay has added her ‘cello’s glorious voice to the mixture, having “got into” folk ‘cello in a big way in the late 1990s and David Gillespie has added his voice to the mix. We call ourselves “Herken” for reasons that are too complicated (and rude, if truth be told!) to get into here. It’s pronounced “Herr-ken” and is simply a Scottish pronunciation of “hearken” … meaning “listen to this”.The Man hopes to entertain you, hopes to make you think, and hopes to move you once again with the old tales, the Bible tales of this man called Jesus. The man strides, shines, roars a bit and, towards the end, staggers through the stories as a rather extraordinary human being. This man is not the blow-dried, blonde-haired “shiny” Jesus of many portrayals. He has long, black hair, he’s Jewish, probably rather scruffy, sweaty and unwashed after days in the desert. He loses his temper. He tweaks his pals’ noses gently when they show prejudice. He captures the hearts of women – Mary, His mother, Mary Magdalene, Martha – clearly this man has major charisma. In the end, he is of course, the son of God who rises from the dead to cook his mates some fish and to save us for all time.

For now, however, he is The Man – and these are some of His stories. So – if you’re already a Christian, we’d like to offer The Man to you as an alternative “take” on the man named Jesus. If you’re not a Christian, we hope that you’ll listen, enjoy the songs and enjoy the pictures. We won’t try to convert you, but if The Man makes you think about the man, we’ll be chuffed!